It’s easy to make your own Vanilla.
This is my vanilla whiskey, vanilla rum & my vanilla extract in vodka.

In 2010 I went on a tour of a Vanilla Pantation In Hawaii. The Hawaiian Vanilla Company is a family run business located on the  Hamakua Coast of the Big Island of Hawaii. If you ever get the chance to visit and stay for a tour and lunch you will not be disappointed.
www.hawaiianvanilla.com
Did you know that the vanilla pod is grown on an orchid? It takes 7 years to produce its first pod after propagation  and the orchid blooms only one day per year for a few hours. Once they bloom they are hand pollinated.  If they are sucessful at pollination a vanilla pod will take 8-9 months to mature.  That is why real vanilla is so expensive.
Artificial vanilla extract is not even made from vanilla. It is made from a constituent of wood. If you plan on baking or using vanilla invest in some real vanilla or make it yourself! 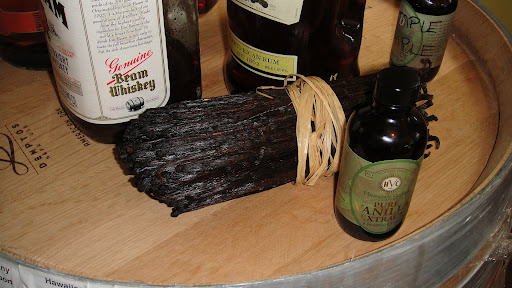 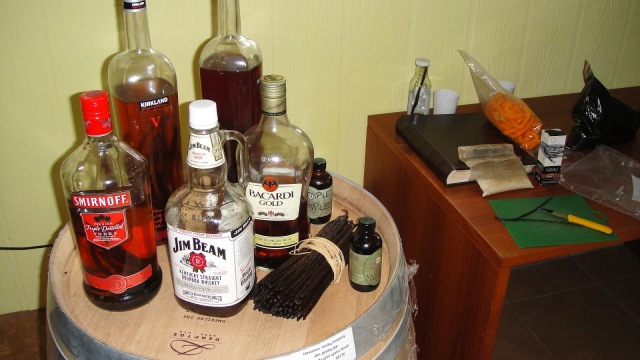 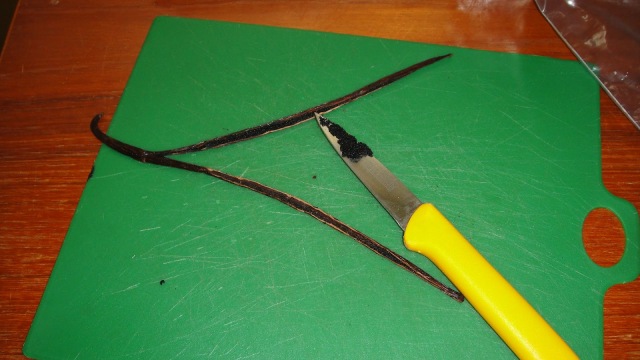 They showed us how to make our own vanilla by splitting vanilla beans and then placing the vanilla beans in a bottle of vodka. If you want to start small then buy a small bottle of vodka & simply split a few beans and stick into the bottle. Leave it for a few months and up to years. I buy my vanilla beans from Costco because they come in a large quantity at a good price for this purpose. If you want the very best quality you can order on line from the Hawaiian vanilla Company at www.hawaiianvanilla.com I bought a few coveted beans when I was there that I used in baking .
You can also use this same method to make Vanilla Rum or Vanilla Bourbon or whatever you would like.

I have made Vanilla Vodka (which is the equivalent of the store vanilla Extract) I used a bottle from a lemonade. This bottle has a good resealable lid. I used a full bottle of vodka and maybe 12 split beans to start. I have had this bottle going since 2010 & as I use it I add more beans & more vodka. It can last for years.I store it in my pantry.
I made a vanilla rum with the small bottles you can purchase and started with a few beans & have kept adding to top off as it gets used. This rum extract is so nice when you are making sweetened whipping cream for something nice like a Key Lime Pie!
I made the Jack Daniels vanilla with a small bottle and a few split beans and this extract is wonderful on a whipped cream that would go nicely on a beautiful  Pecan Pie.
If you want to make a Vanilla Flavoured Vodka to drink or mix in cocktails then add a few whole beans (do not split them) to a bottle of vodka & leave it for a few weeks until it tastes as strong as you like, then remove the beans. If you split the beans it will make the vodka dark like my bottle on the right. If you want the vodka to stay more clear leaving the beans whole will impart some flavour but not so much that it turns to extract. When you remove the pods do not throw them away. You can add them to your bottle of extract or split them and add to a jar of sugar to make homemade vanilla sugar. 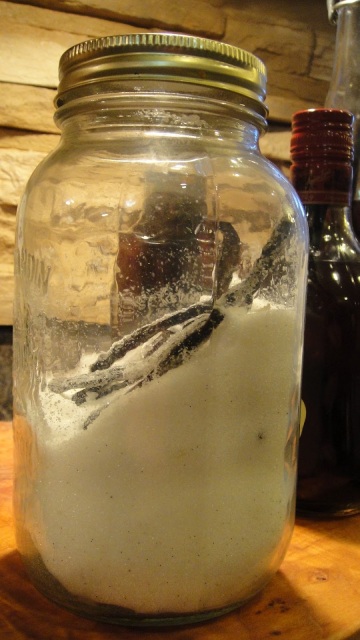 I always have a jar of vanilla sugar in my pantry. If you use a vanilla bean in a recipe like making a vanilla custard do not discard the used pod. Wipe off/rinse any residue and dry out then toss into the sugar . Keep topping off and adding beans to keep it going. This is so much nicer and cheaper than buying vanilla sugar in those little packages.